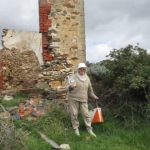 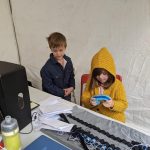 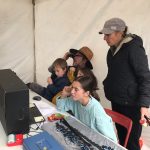 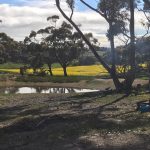 Last weekend was the culmination of this years cross country events with the event at Log Hut Gully set by Gary Ettridge. It was 6 months in the planning, starting off early in the year by Gary going out to the site and identifying all the control points Ito be used and  then setting the courses on the Orienteering program. A couple of weeks before the event the course setter went out again and changed a couple of controls to shorten the Easy Course. The week before the event there were strong winds forecast so this meant putting the controls out earlier than planned. Fortunately they were all in the right place on the day but some of the orienteers might dispute that!

The day dawned perfectly and Gary Ettridge and Clint Aird left early to put out O signs &  set up camp. Gordon Pope who is a stalwart of Lincoln Orienteers was there waiting for them.

There were 37 participants taking part with many of them commenting on the beautiful green country, the brilliant yellow of the canola crop and the spectacular views from the top of the hills. Some people were lucky enough to see wild orchids growing There were a couple of small showers around but they did not amount to much and map bags weren’t needed. A few technical issues with SI sticks not recording properly  were resolved by Phil & Clint. The sport ident system is excellent for setting courses as it allows the course setter to zigzag all over the map without using such a large area for longer courses.  Archie & Matilda Aird were keen to help Grandpa & Dad in the tent especially Archie who is already an expert in technology.

Elise Clem had a great run in the Hard Short despite the challenge of going straight through thick scrub going down to the gully.  Sienna White also did well in this harder course and is already showing great improvement.  Not to be outdone by her sister Bella White who chose the Hard X Short did well to finish first in that event.

In the Moderate individual course there were six starters and Clint Aird came first in that event showing that he has not lost his orienteering skills closely followed by Paquita White and then Mike Stockdale.

Sharon Noske and Megan Aird had a close run in the Moderate Short Course placing first and second respectively. Leroy and Lise came out to orienteering after a long break and enjoyed the Easy Course completing in a good time.

We had one drama at the end of the day as we were packing up. Where were Linda and Lyn?  I warned her not to take any longer than 3 hours as the tortoise was mine and here it was now pushing 4 hours. I had reports of her being seen out on the main road heading for Port Lincoln. Finally luckily we got a phone call saying they were lost and not sure where they were but could see a power line. We told them to head for that and go south and see if they could find the dam.  Phone reception is very iffy out the but they phoned back saying they had found the dam and were exhausted so I set out driving to the dam. Got there but no Linda. Where was she?  Maybe at some other dam. I had no reception so decided to drive up the hill and then I saw them. Linda was lying prone on the ground and Lyn was kneeling over her. I panicked a bit thinking I would have to do CPR but Linda was just resting up her back and they were very pleased to see me. They had got to control 6 the old ruin and only had to go down hill to the finish but for some reason must have done a 180 and headed off the map