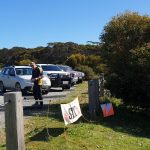 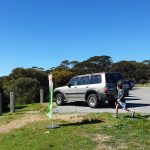 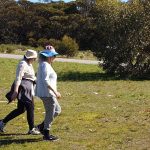 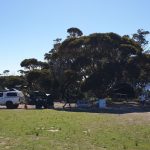 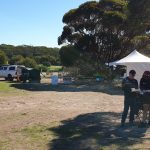 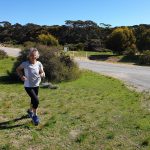 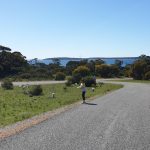 The frustrating three week delay to this event had its upside, as we were blessed with perfect weather on the day and a pleasing attendance of 40 people.

It has been around fifteen years since we orienteered in this area, and most people agreed on what a great place it was.  The new map also drew favourable comments.

There were several controls that proved elusive however – the first control on Courses 4 &5, only 100 metres from the start, took most people around 3 minutes to locate, but there were also times of 33minutes and 17 minutes.  The compass leg through the green from control 1 to 2 on Course 1 and 2 also provided a challenge.  Elise retained bragging rights in the Clem family, finishing ahead of Phil who wasted 10 minutes on his first control; Tim Ashman and Alison Hoopman had a close tussle for first and second on Course 1.

Three of our Juniors have been selected in the State team –Austin Clem, Sienna & Bella White. Austin and Sienna had a good battle for first place on Course 2, each getting their share of fastest legs.

Patrice Glass had a brief moment of glory, recording the fastest time on Course 4 when the electronic timing software failed to note that she had missed 2 controls.  That Course was won convincingly by Clinton Aird, returning to orienteering after a long absence.  Time to step up to the harder courses, Clint!

Elodie Nohlmans dismissed her win on Course 5.  She was the only entrant, she claimed – but a very respectable time means she can be proud of her performance.  Course 6 was hotly contested by our Under 10 brigade, with Noah McConnell taking the honours over Jack Hocking.